4 Keys to Handling Temper Tantrums so You can
Enjoy Going out to Eat Again!

Are you afraid to go out in public with your children? Do you dread an invitation to go out to dinner for fear of the embarrassing temper tantrums from your child? Do you still dream of enjoying a family dinner out anyway? 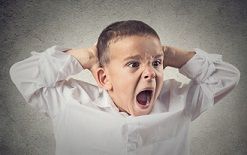 When you have a child who frequently has temper tantrums, the more your child is in public, the greater the chance of him having a temper tantrum with an audience of onlookers. While temper tantrums at home are surely no fun, a temper tantrum in a public place is often far worse. What can a parent do to deal with the dreaded temper tantrum at the grocery store or after sitting down for a meal at their favorite restaurant?

Children use temper tantrums for several reasons. They are a way of communicating and a way to release emotions such as frustration and anger. Perhaps the most understood reason for a child to have a temper tantrum is to gain control in a certain situation. While in public, a child may have a temper tantrum in order to get something they want. It could be a toy or candy that they have already asked for and mom or dad has told them “no.”

There are several steps parents can take to prevent and deal with a temper tantrum in public. These are Prevention, Distraction, Isolation, and Persistence.

1.  Prevention is related to making sure the child is not tired, hungry, or over-stimulated when going to a public place. Tired, hungry, or over excited children are far more likely to have a temper tantrum than children who are rested and who have a full belly. Being sure basic needs are met before going out to a busy grocery store or to the mall is the first step.

2.  Distraction is the first step once the temper tantrum begins. Often a parent can avoid an all-out temper tantrum by immediately changing the subject or moving to another area of the store.

3.  If distraction did not work, isolation is the next step. Take the child to a more private place with a much smaller audience. A bathroom or to your car in the parking lot are possible choices. This will reduce embarrassment on the part of the parent and help mom or dad stay in control and not get angry, which will only make matters worse. Give the child a few minutes to completely calm down before returning to whatever it was that you were doing before the temper tantrum began.

Tender Hearts Child Therapy Center can help parents who are struggling with their child’s temper tantrums. If you fear going out in public with your child or have to leave your child at home to go grocery shopping, give our office a call. Our Child Counselors can help you gain skills necessary to tame the temper tantrums and enjoy going out in public with your kids again! Call Today!

How to Tame Temper Tantrums

If you’re a pare

Some common reasons for Temper Tantrums

Temper tantrums can range from whining and crying to full blown fits of screaming, kicking, or hitting.  Boys and girls are equally prone to having temper tantrums and they are more common between 1 to 4 years old. However, temper tantrums sometimes continue into elementary age.

Temper Tantrums can occur when children are tired, hungry, afraid, or uncomfortable. They also erupt when your child is seeking your attention and doesn’t know of a better way to get it. Temper Tantrums are sometimes the result of kids’ frustration with the world—they can’t get something (for example, an object or a parent) to do what they want. Frustration is an unavoidable part of life and they just need to learn how people, objects, and their own bodies work.  Resulting Temper Tantrums occur when your child doesn’t have the ability to use self-control skills to calm down.

Parents should remember that children model what they see. If you have your own tantrum because you’re frustrated with your angry, out of control child, what message is that sending to him or her? You’re the adult and you need to remember that, even in stressful situations like those that occur during Temper Tantrums.

Need a little encouragement? Parents magazine provides a few tips to stop the meltdown with younger children, particularly toddlers and kids under age 4:

But what if the Temper Tantrums continue?

Most children eventually outgrow Temper Tantrums as they learn to handle emotions and frustrations by using self-control skills. However, if your child is moving into the elementary school years and tantrums continue or even intensify, there could be underlying issues that require the help of a trained professional. Temper Tantrums in the elementary school years and beyond could be a sign of other issues such as learning problems or a social skills deficit that impacts his or her ability to get along with other children. Tantrums in elementary school age children are not to be taken lightly.

Learn how our Child Counseling and Family Counseling services can help your child learn self-control skills to tame even the most intense Temper Tantrums and how you can become a happy, confident parent once again!

What our Clients are Saying…

The counselor made my shy son feel like he was right at home.

Very satisfied with my counselor. She is very helpful and kind. I have referred other people to Tender Hearts.